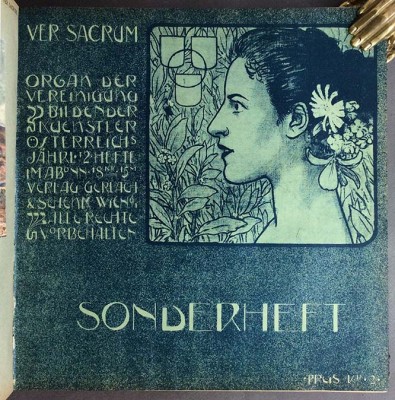 Two complete bound volumes of Ver Sacrum, published 1898-1899 by Gerlach, Schenk and Seeman, illustrated throughout with lithographs, woodcuts and etchings by leading contributors to the Viennese avant-garde including Kolomon Moser, Gustav Klimt, Josef Hoffmann, Alfred Roller and others.

Ver Sacrum (Sacred Spring) was the official organ of the Vereinigung Bildender Kunstler Oesterreichs, the group responsible for the Vienna Secession movement. It was published between 1898 and 1903, though after 1900 it became a members-only publication. The members of the group provided artwork for the magazine's covers and also took editorial responsibility. From the outset, Ver Sacrum was one of the most prestigious and influential periodicals of the period, reporting on activities of the Secession Movement as well as having special issues dedicated to major artists or special subjects, such as Japanese art. These twelve issues cover the entire first year, January through December of 1898, of Ver Sacrum's publication, and cover such notables as Viennese artists Gustav Klimt, Koloman Moser, Josef Hoffmann and Alfred Roller, as well as Belgian standout, Felician Rops, and the illustrious Alphonse Mucha.