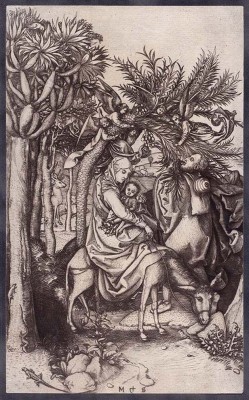 Title : The Flight into Egypt

This fine, original antique wood-cut print an illustrating of the Flight out of Israel into Egypt by The Holy Family by Martin Schongauer - signed M†S - in 15th century was faithfully re-engraved and published by Charles Amand-Durand in 1870.
These beautiful re-engravings of classic and historical wood-cuts were painstakingly re-issued by Amand-Durand in Paris in the mid to late 19th century. Such is the quality of his re-strikes that Durands prints are now in major institutional collections such a the Louvre, National Gallery, The Met and many other famous Galleries.

Background: Martin Schongauer 1445 - 1491 was one of the most prolific early engravers from the Rhine Valley. He signed all his prints with his initials, making him the first printmaker whose authorship was absolutely clear. While a handful of the artist’s paintings survive, Schongauer’s engravings inspired generations of artists, including Albrecht Durer. This iconic image shows the Holy Family resting while fleeing the Massacre of the Innocents and their home in Israel for Egypt. The work reflects some traditional accounts of the story, in which angels lowered date palms for easy harvesting, so Mary, Joseph, and the Christ Child would not starve.
Schongauer was the most important printmaker north of the Alps before Albrecht Durer.
The main work of Schongauer's life was the production of a large number of beautiful engravings, which were largely sold, not only in Germany, but also in Italy and even in England and Spain. Vasari says that Michelangelo copied one of his engravings, in the Trial of Saint Anthony. His style shows no trace of Italian influence, but a very clear and organised Gothic.
His subjects are mainly religious, but include comic scenes of ordinary life such as the Peasant family going to market or the Two apprentices fighting. One hundred and sixteen engravings are generally recognised as by his hand, and since several are only known from a single impression, there were probably others that are now lost. Many of his pupils\' plates as well as his own are signed, M†S, as are many copies probably by artists with no connection to him.

Among the most renowned of Schongauer\'s engravings are the series of the Passion and the Death and Coronation of the Virgin, and the series of the Wise and Foolish Virgins. All are remarkable for their miniature-like treatment, their brilliant touch, and their chromatic force. Some, such as the Death of the Virgin and the Adoration of the Magi are richly-filled compositions of many figures, treated with much largeness of style in spite of their minute scale.
He established the system of depicting volume by means of cross-hatching (lines in two directions) which was further developed by Durer, and was the first engraver to curve parallel lines, probably by rotating the plate against a steady burin. He also developed a burin technique producing deeper lines on the plate, which meant that more impressions could be taken before the plate became worn.
According to Arthur Mayger Hind, Schongauer was one of the first German engravers to rise above the Gothic limitations both of setting and type and that he actualises an idea of beauty which in its nearer approach to more absolute ideals appeals to a far more universal appreciation than earlier engravers such as Master E. S.